On the top floor of my house there are three bedrooms; the two belonging to the children and a tiny single room that I thought they could use as a study – the room with the mango custard floor. It was relined at the same time as the children’s rooms were redecorated and rewired, so technically it is finished.

Except that I couldn’t decide how I wanted to decorate it. Other than painting the walls an off white, I hand’t given it much thought! Except for getting rid of the mango custard floor, of course. You will have heard designers say this before “it’s really hard being the client,” there’s so much choice and I can be decisive for my clients in a way that I can’t be for myself. So the decision making process has been slow for this little room. That and the fact that I didn’t really want to spend any real money on it. Then we had a string of guests and needed an extra bed, so a sofa chair was purchased to be housed in the little room. The desk that had been in my daughters room at the previous house also needed a home, so that too is in the little room. Then we needed some shelving (thank heavens for the summer sales) and all of a sudden this little space was getting dangerously close to becoming the unwanted objects corner.

A decision had to be made because the more stuff going in there meant the less space to manoeuvre when the decorating was finally planned. So while the children were on holiday I moved everything out into their bedrooms and got cracking.

My guilty pleasure over the summer of house moving and unpacking has been a programme called ‘Escape to the Chateau.’ Oh how I love Angel’s decorative style – and it got me thinking, I’d thought of doing something very similar to one of her schemes, but had never had the right space to do it in…

Enter the box of wallpaper samples. 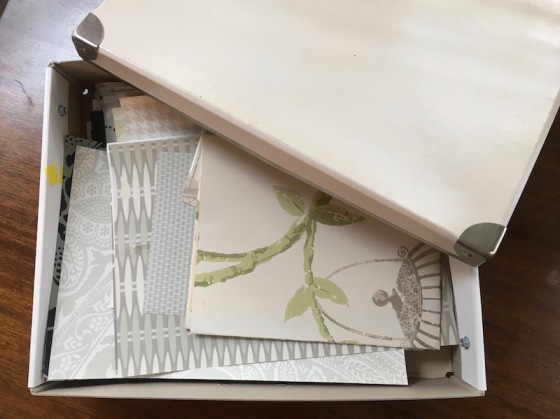 Over the years I’ve amassed hundreds of wallpaper samples for clients and the rejected ones all ended up back in my studio. In the moving process I had gotten rid of quite a few samples that I knew I would never use (dated, not to my taste and probably discontinued by now anyway) but none-the-less there was a sizeable collection of many different colours and patterns. I started sifting through and found that I could gather a collection of blue/grey samples that was a good start to a feature wall. I calculated that the wall was twelve samples wide and seven samples high, but here’s the annoying thing, they’re not all the same size, even a standard A4 varies from one supplier to another. Was I going to cut each one so it was exact? Groan.

As I pondered this I realised that the walls weren’t in any way regular; neither the ceiling nor the floor were level, so I decided I would just go with it… and cover up any messy joins if I needed to. 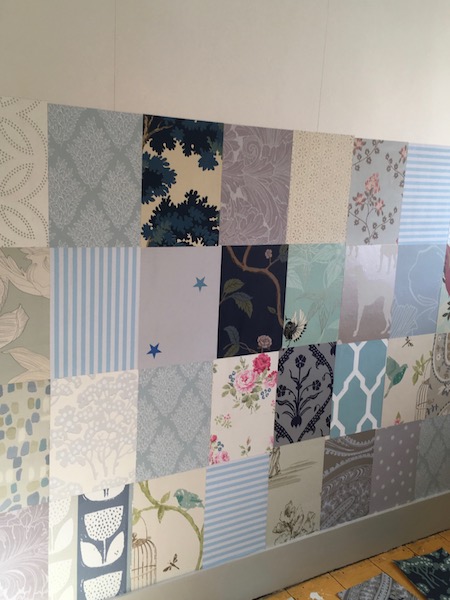 The tools I used were a cutting mat and Stanley knife, wallpaper paste and a brush, a damp sponge and a printing roller to smooth out any air bubbles. I also used a spirit level to set my plumb line and I did this one column into the wall. I decided not to start in the middle because of the varying sizes of the samples and felt that there was enough going on for it not to look anything other than a part of the design to have a narrower column at the window end. This will also be covered by a curtain in time, so I really didn’t focus on that the way a professional decorator would have done.

I pasted each sample individually and worked two at a time so that one was softening while the other was being put up. The paste allows for quite a bit of repositioning and straightening, so any real unevenness could be moved gently. I then sponged each piece to get it smooth and rollered from the centre out to remove air bubbles. There were some joins that were really off which I could do nothing about, so I cut out flowers from other scraps I had kept and used those to cover the gaps. 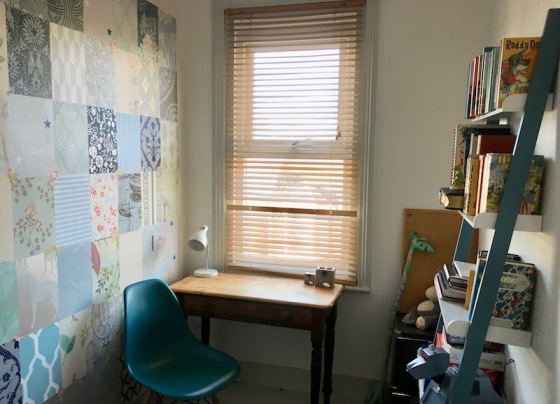 It’s a very bold wall. But now this tiny room has an identity and is the patchwork room, it’s a bit of a time capsule too because papers that we’ve used in other homes are also on this wall and various childhood books and some toys have also found their way in there. The colours have been the unifying link and that’s fun as well, because I’ve popped in to find that the children have added a few things to the space. The curtain will finish it in the same faded blues and greys – but I have to get out the sewing machine yet! 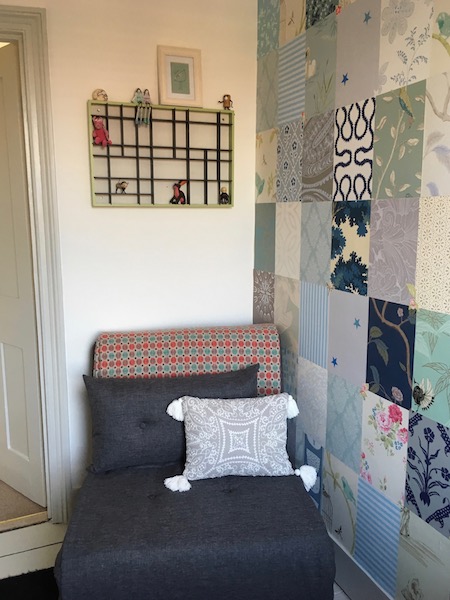 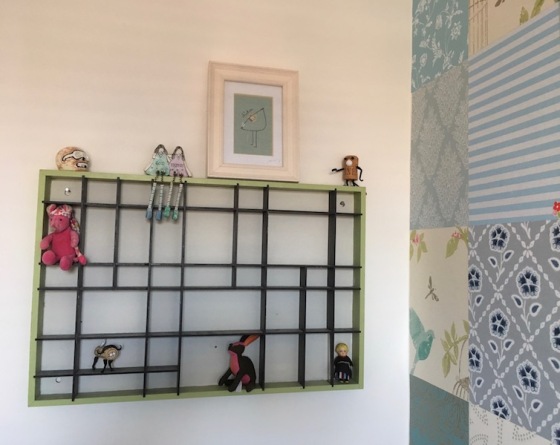